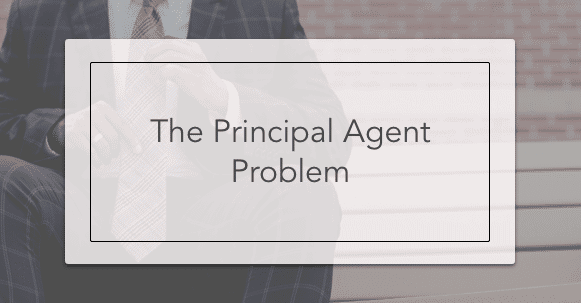 The Principal Agent Problem occurs when one person (the agent) is allowed to make decisions on behalf of another person (the principal). In this situation, there are issues of moral hazard and conflicts of interest.

In many real-world examples, the agent will not prioritize the best interest of the principal, but will instead pursue his own goals. Politicians (the agents) and voters (the principals) is an example of the Principal Agent Problem.

A widespread real-life example of the principal agent problem is the way companies are owned and operated. The owners (principal) of a firm will elect a board of directors. The board of directors monitor and guide the management team like C-Level executives (the agents). More often than often, these agents will act in their own best interest. For example, greenlighting a massive project that gives them more authority or prestige instead of pursuing something else that could maximize shareholder value.

“Too Big To Fail” is another example of the principal-agent problem. The idea behind too big to fail is that some companies become so significant and critical to the economy, that no matter what they do, the government will bail them out. This situation creates a moral hazard, where the agents have no incentive to do the right thing since they know they won’t be holding the blame at the end. This happened infamously during the Great Recession, where the American government bailed out companies and banks like AIG and JPMorgan Chase, two of which alone received nearly $100 billion in assistance from the federal government.

The principal-agent problem is also an example of market failure. Market Failures occur when there is a misallocation of resources, which results in distortions in the market. This distortion creates an inefficiency in the market. There are four probable causes of market failures; power abuse (a monopoly or monopsony, the sole buyer of a factor of production), improper or incomplete distribution of information, externalities and public goods.

A market failure occurs because the agent pursues his own self-interest rather than the interest of the principal. This creates an inefficiency in the business.

1 thought on “The Principal Agent Problem”