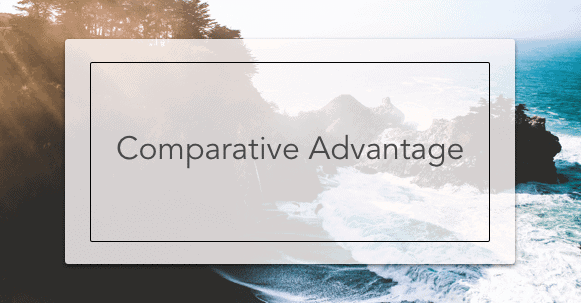 What is Comparative Advantage?

Economist Adam Smith advocated the theory of absolute advantage, where he argued that a country should choose to produce a good if it can produce more of the good with the same or fewer resources than another country. This theory is different from comparative advantage.

Why Does Comparative Advantage Matter?

The concept of comparative advantage isn’t just important—it’s one of the most significant ideas in the field of economics as a whole. That’s because it underlies an absolutely crucial point: that parties like states may always derive economic benefit through trade.

This realization on the part of foundational economists like Adam Smith David Ricardo has been fundamental to the nature of our economic system in the modern era. For this reason, any understanding of international trade depends on a strong understanding of comparative advantage.

The Crucial Role of Opportunity Cost in Comparative Advantage

Competitive advantage is the capacity of a country (or on smaller scales, of a company) to offer higher levels of value to consumers than other countries, companies, etc. It is also similar to comparative advantage, but not identical in nature.

There are three primary ways that an actor can gain a competitive advantage over other economic actors:

A major factor that affects comparative advantage is the country’s quality and quantity of the factors of production. For example, the natural availability of mineral resources like iron, gold, and copper is not something a country can change.

Movements in exchange rates affect the prices of imported and exported goods. For example, if your home currency depreciates which means foreign currency can buy more of your home currency, then your exports will increase as your goods are cheaper relative to others.

An increase in the rate of inflation would make exported goods more expensive and imported goods cheaper.

Subsidies and taxes are examples of trade barriers that can be implemented by the government to create an artificial comparative advantage. A subsidy would make exports more competitive and a tariff would discourage imports.

The theory of Comparative Advantage assumes that the costs remain constant for producing any number of goods. This means that if you require 2 hours to make one shirt, then you will spend 10 hours to make five shirts, 20 hours to make ten shirts, etc. In reality, costs will go down because of economies of scale.

There are no transportation costs, i.e. it does not cost anything to move goods from one place to another. This assumption is also not rooted in reality.

Free trade exists between the two countries. This means there are no barriers to trade.

Here is a very simple example of how the law of comparative advantage functions. (To be clear, in the real world, things are much more complicated and less straightforward than this, so we’re simplifying for clarity.) In the diagram below, we have two countries: Red and Black country. These two countries can each produce two goods: Good X and Good Y.

Let’s also consider how comparative advantage can manifest in the life of an everyday person. For instance, let’s say you are a skilled engineer and also a great chef.

When you’re deciding which of these career paths would be more lucrative, you’ll have to consider which of the two options has a higher opportunity cost. Because being an engineer almost always pays better than being a cook, the comparative advantage would be in engineering.

The opportunity cost of being a chef is higher, because of all of the missed earnings for each hour you spend in the kitchen.

It’s not possible to move factors of production so easily from one location to the other (when countries have to specialize in a particular good).

There are transportation costs that the model does not consider.

The model assumes perfect competition that doesn’t exist in reality. We often see oligopolies and monopolies.

There are trade barriers that prevent countries from efficiently using comparative advantage such as tariffs and quotas.

The Heckscher-Ohlin Model describes the interaction of relative abundance of factors and relative intensity of their use in different production processes.

The model builds on David Ricardo’s theory of comparative advantage by predicting patterns of commerce and production based on the factor endowments of a trading region. The model essentially says that countries will export products that use their abundant and cheap factor(s) of production and import products that use the countries’ scarce factor(s).

Assumptions of the Heckscher-Ohlin Model

Conclusions of the Heckscher-Ohlin Model

The exports of a capital-abundant country will be from capital-intensive industries, and labor-abundant countries will import such goods, exporting labor-intensive goods in return. Competitive pressures within the H–O model produce this prediction fairly straightforwardly. Conveniently, this is an easily testable hypothesis.