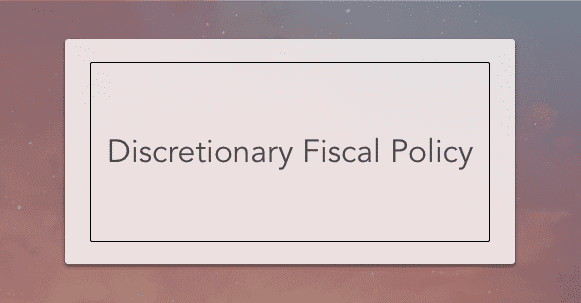 Discretionary fiscal policy refers to government policy that alters government spending or taxes. Its purpose is to expand or shrink the economy as needed. For instance, when the UK government cut the VAT in 2009, this was intended to produce a boost in spending.

When an economy is in a state in which growth is getting out of control and therefore causing inflation and asset price bubbles, a contractionary fiscal policy can be used to rein in this inflation—to bring it to a more sustainable level. A contractionary discretionary policy will lower government spending and/or increase taxation. This policy will shift aggregate demand to the left (this denotes a decrease).

A fiscal policy is said to be tight or contractionary when revenue is higher than spending (i.e. the government budget is in surplus) and loose or expansionary when spending is higher than revenue (i.e. the budget is in deficit). The focus is not on the level of the deficit, but on the change in the deficit. A reduction of the deficit from $200 billion to $100 billion is said to be a contractionary fiscal policy, even though the budget is still in a deficit.

Contractionary fiscal policy slows growth, which includes job growth. With fewer jobs, and higher taxes, both families and businesses are left with less income available for spending. With this decreased demand, then, the economy’s growth is slowed.

An expansionary discretionary fiscal policy is typically used during a recession. A decrease in taxation will lead to people having more money and consuming more. This should also create an increase in aggregate demand and could lead to higher economic growth. However, it can also lead to inflation because of the higher demand within the economy.

Expansionary fiscal policy creates jobs, and is executed via contractors (indirectly) or public workers programs (directly). With more jobs, the overall populace has more funds to spend, leading to higher levels of demand. This creates growth in the economy. Along with tax cuts, growth is especially accelerated. Among the best stimuli for the economy are unemployment benefits, proven empirically via economic studies. Tax cuts are less effective in creating jobs, as the tax rate must already be high for lowering taxes to do so (the Laffer Curve is the economic theory describing this principle).

The drawback of expansionary fiscal policy is that it can lead to budget deficits. This is because the government is effectively spending more than it ends up receiving in taxes. The Greek government-debt crisis, beginning in 2009 and lasting roughly a decade, as a result of this issue.

Notably, democracy tends to lead to expansionary discretionary fiscal policy. This is because lawmakers campaign on the promise of government spending and lowering their constituents’ taxes. Then they follow through in order to win popular support and get re-elected.

Fiscal policy is characterized by a time lag, which is the time between the implementation of policy and the actual effects of that policy being felt in the economy.

It has an expansionary bias. No government or politician would implement a contractionary policy, so this means that expenditure will keep rising and taxes would probably not rise too.

Contractionary policy is difficult to implement because no one wants cuts in spending. Education, defense, and health are priorities and most people want to ensure that they are adequately funded. It also cannot be maintained indefinitely. It is considered to be a short-term tool, not a long-term solution.

Expansionary fiscal policy can lead to a higher trade deficit, as higher income leads to more expenditure on imports and a higher negative trade balance.

An expansionary policy may lead to crowding out. Crowding out occurs when a big government borrows money. This leads to higher interest rates for the private sector, which ultimately leads to less private investment.

Discretionary fiscal policy utilizes two key tools. The first is the discretionary portion of the budget, and the second is the tax code.

With regard to the U.S. budget, appropriations bills by Congress decide the nature of this form of spending—in the United States, the military budget is the largest target of these appropriations. Changes in the mandatory budget do not fall under the umbrella of discretionary fiscal policy because Congress has to vote to amend laws to alter these programs, and they are difficult to change.

The other tool, tax codes, includes a number of taxes: corporate profits, incomes by workers, imports, and other kinds of excise fees. Congress alone has the ability to alter the tax code by establishing new laws, passed by the Senate and the House of Representatives. The president can affect how these laws are then implemented by using his executive power to decide how the Internal Revenue Service (IRS) enforces them.