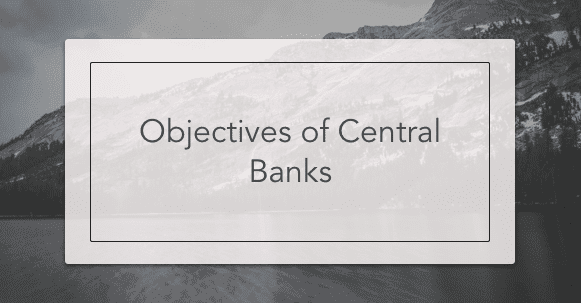 Central banks oversee the banking system in their country. They play an important role in managing a state’s currency, money supply, and interest rates. There are five primary objectives of central banks.

The Federal Reserve is the central bank of the United States.

A central bank pursues a low and stable rate of inflation.

It aims for a high, stable real growth and high employment rate in the economy.

It promotes a stable financial market and financial institutions.

To Create a Successful Central Bank

A successful central bank needs to be independent of politics, policymakers and outside influence. It has to be transparent with its policies to maintain credibility. In the past, politicians interfered with the central bank’s policies, which led to high levels of inflation. Eventually, these consequences promoted the idea of an independent central bank that is accountable for its policies and decisions.

A central bank has to be clear in communicating with financial markets & the public. This helps build trust with the public. The decision-making process has to be made by a committee. There needs to be coordination of fiscal and monetary policy.