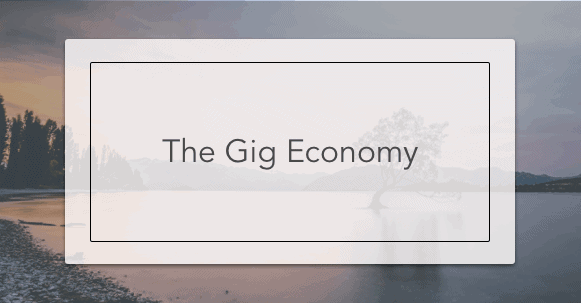 The concept of a gig economy (or sharing economy) is engraved in our human instinct. Cooperative structures that include sharing, individual choices, gifting and swapping are a basic part of any community. However, to adopt the gig economy as a business structure is relatively new.

What is the Gig Economy?

The term “gig economy” has only recently come about in the mid-2000s. It mainly spread due to a combination of social technologies and a realization of global issues, including population growth and resource depletion. The financial crisis in 2007 also awakened people to be creative and turn underutilized materials into steady incomes.

However, it is adopted as a business structure is relatively new, and the term “gig economy” has only recently come about in the mid-2000s. It mainly spread due to a combination of social technologies and a realization of global issues, including population growth and resource depletion. The financial crisis in 2007 also awakened people to be creative and turn underutilized materials into steady incomes.

Currently, there has been an increase in businesses that are developing around the idea of the gig economy, and this number will only continue rising. Some popular examples include Uber, a ridesharing service, Airbnb, a home-renting website, and Upwork.com, a website that allows people to accept gigs in their free time and potentially turn it into a full-time job.

These businesses are prime examples of how the sharing economy works to benefit both people receiving the service and those who are giving the service. If you have a skill, you use it to help someone and earn money. Or if you need a ride somewhere, you can find the cheapest and fastest option in a matter of minutes. If you have an empty room, you can rent it out on Airbnb for extra cash.

Economics of the Gig Economy

The gig economy transforms the relationship between the employer and the contractor. Instead of traditional roles, the buyer and seller see the process more like an exchange. Money is a huge incentive, but there is also a community aspect. When people choose to use Airbnb to spend the night, they are usually hoping to get to know the local area through the host’s recommendations. It benefits travelers who are looking for unique and cheap housing with a local experience. Employers and contractors become equal, and trust and credibility become important factors. These factors can be seen through building work relationships on Upwork, to staying the night in a stranger’s home with Airbnb.

The Sharing economy broken down is the idea that most people have idle resources, and that there is an importance in creating value in something that otherwise would go wasted. Looking into it even further, when scarce resources are being wasted, this is a problem for both the economy and the health of the planet. Addressing this waste is the essence of systems thinking. Systems thinking views everything as interconnected, and only within relationships can we understand how something is working.

Economists see the gig economy as where the future is heading. It thrives in large urban settings, and the rate of urban dwellers continues to grow every year. Cities are the best place for a sharing economy due to some people both offering services and needing them. As technology continues to develop, the limits we see now will become less, and we will find ourselves living in a completely different world.