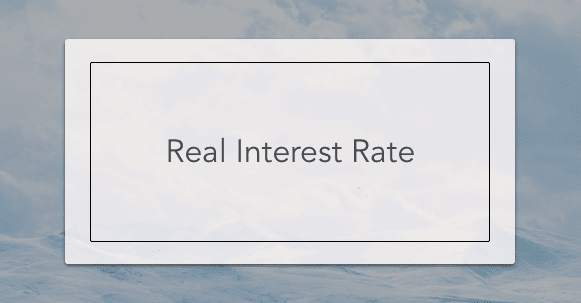 The real interest rate is found by adjusting a standard interest rate so that the effects of inflation are not present. This allows you to understand the interest rate better by revealing the true yield of lenders and investors as well as the true cost of funds for borrowers.

The World Bank has a page containing the real interest rates for most countries.

The real interest rate is a representation of how much individuals favor current goods rather than goods in the future. If a borrower is choosing to use funds now they are prioritizing current goods above future goods, or showing a greater time-preference for current goods; they are thus prepared to take out a loan with a higher interest rate. Meanwhile, lenders who wait to spend funds until the future are demonstrating a lower time-preference and can loan at a lower rate of interest.

The basic formula is as follows:

The more precise and mathematical formula is:

Since calculating the real interest rate requires you to know the rate of inflation, it’s important to understand this as well. The rate of inflation describes how much the cost of goods/services will increase in a particular year.

Here is the formula for calculating the rate of inflation:

Difference Between the Real & the Nominal Interest Rate

To continue the example, now imagine that the inflation rate was 5%. A 5% inflation rate means that an average basket of goods you purchased this year is 5% more expensive when compared to last year. Continuing with our previous example, the lender would make nothing if he loaned it out at 5% when the rate of inflation was 5%.