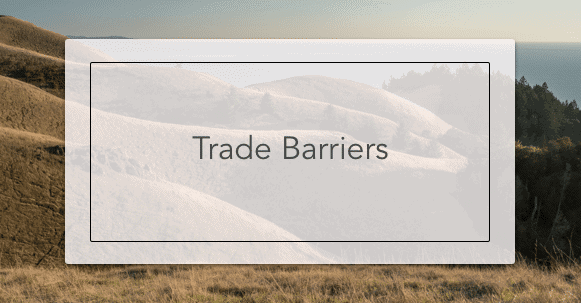 No country however rich or large can make everything it needs or has all the resources it requires for its manufacturing industries. Yet, some countries are against free trade. They believe that free trade is bad for their economies and hurts growth and employment. So, what are the arguments used to impose trade barriers?

International trade enables countries to have access to products which they are unable to produce. For example, small nations in the Middle East have large deposits of oil. They have become very wealthy from those oil deposits. However, even with all that money, they don’t manufacture everything themselves. Instead, they exchange their oil for motor cars and airplanes which are built by countries like the United States, Japan, and Germany. These countries have little or no oil deposits of their own.

There are four types of trade barriers that can be implemented by countries. They are Voluntary Export Restraints, Regulatory Barriers, Anti-Dumping Duties, and Subsidies. We covered Tariffs and Quotas in our previous posts in great detail.

Reasons Governments Are For Trade Barriers

For example, the U.S. has import tariffs on sugar, making imported sugar more expensive than domestically-grown sugar. Thus, people in the US are going to buy US-produced sugar, which keeps money in the wallets of US sugar producers and farmers.

2. To improve a trade deficit

Trade barriers make imports more expensive, and as a result, they also decrease the demand for imports. However, in retaliation trade partners can do the same and increase prices for exports.

Thus, this using this rationale, governments won’t necessarily fix the problem, if domestically produced goods aren’t competitive or are not high-quality. Countries will also spend less on imports if their exports go down.

Countries want to give newly developing industries (known as infant industries) time to grow and become competitive. This is a reasonable argument for imposing trade barriers.

However, in some cases, government protection never ends. These industries become competitive only because the government has given the benefit of the trade barrier.

Dumping is when an importer sells products at a below-average cost of production.

Dumping is hard to prove, yet nonetheless, sometimes countries impose anti-dumping duties just because it is competing against a locally manufactured product.

Governments gain extra revenue from tariffs (which is a tax on imports). The tariff may be in the form of a specific or ad valorem tax. Tariffs raise the price of the imported good and lower their consumption.

Any “legal” barriers that try to restrict imports. These include things like safety standards, pollution standards, product standards that specify that the product should meet or exceed standards set by the local government. For example, car manufacturers often have to pass certain safety ratings to sell the car in the importing country.

Dumping happens when the exporting producer sells goods below cost. The government then can impose a duty on the good till the World Trade Organization decides the issue. However, firms often claim that the good is produced below the cost to buy more time for themselves. It is often difficult to determine the actual costs of the firm.

A tariff is a type of trade barrier that acts as a tax on imports. The tariff may be in the form of a specific or ad valorem tax. Tariffs raise the price of the imported good to lowers their consumption. This price increase encourages consumers to pick the local option.

A quota, a type of trade barrier, is a restriction on the quantity that can import into a country. Quotas and Tariffs are effectively the same except that governments collect revenue from tariffs, while exporting firms can collect extra revenue from quotas. This increases the firm’s export revenues.

Example of a Trade Barrier (Subsidy)

Initially, world price is P, the domestic industry produces Q1, local demand is Q2, and the rest Q1Q2 is imported. The subsidy reduces the cost of the firm by the subsidy per unit; this results in local supply shifting to S After Subsidy.

The local firm can now produce Q3, and Q3Q2 is imported. P1 is necessarily the “price” that customers pay for Q2 since the government pays for the subsidy (line P1P). The subsidy eventually becomes a burden on the taxpayer.