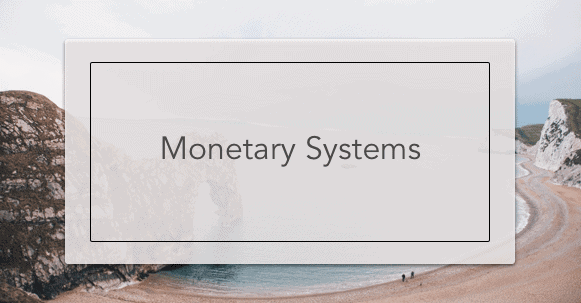 A Monetary System is defined as a set of policies, frameworks, and institutions by which the government creates money in an economy. Such institutions include the mint, the central bank, treasury, and other financial institutions. There are three common types of monetary systems – commodity money, commodity-based money, and fiat money.

Currently, fiat money is the most common type of monetary system in the world. For example, the US Dollar is fiat money.

The Three Types of Monetary Systems

This is made up of precious metals or other commodities that have intrinsic value. In order words, the monetary system uses the commodity physically in terms of currency. This form of money retains its value even if it’s melted down. For example, gold and silver coins have been commonly used throughout history as a form of money.

This draws its value from a commodity but doesn’t involve handling the commodity regularly. The notes don’t have tangible value but can be exchanged for the commodity it is backed by. For example, the US Dollar used to draw its value on gold. This was known as the Gold Standard.

It is also a standard unit of measurement that can be used to price things and to compare value. For example, a book costs $150, a meal costs $5, and a long-distance call costs $0.10/min. To compare their value, we can say one book = 30 meals = 1500 minutes on a long-distance call.

Money can be used to store value, and thus it becomes an asset itself. However, money may not be a good store of value since it loses value over time due to inflation.