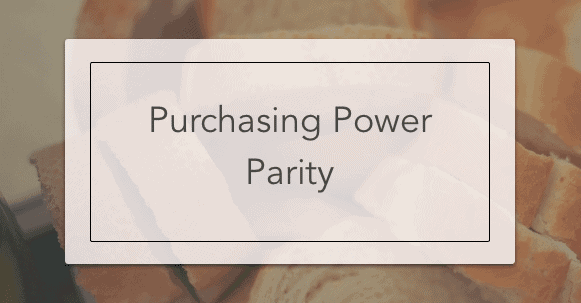 Purchasing power parity (PPP) is a theory that says that in the long run (typically over several decades), the exchange rates between countries should even out so that goods essentially cost the same amount in both countries.

The Theory of Purchasing Power Parity explains that there should be no arbitrage opportunities (where price differences between countries can result in profit). Purchasing power parity is used to compare the gross domestic product between countries.

PPP is based on the Law of One Price, which implies that all identical goods should have the same price. It is usually calculated using a similar basket of goods in two countries and is also used to evaluate under-/overvalued currencies.

The real exchange rate (RER) is a related concept to PPP. It calculates, for example, how many iPods in country A are equal to one iPod in country B. It usually is calculated with a basket of goods.

The formula for RER is as follows:

This rate means that half an apple is the US is the equivalent of one apple in Mexico. This creates an arbitrage opportunity, but if the RER were 1, then we would have a situation of purchasing power parity.

For example, let’s say there are two countries: Country A and Country B. The average cost of goods in Country A rises 5% in a year due to inflation; meanwhile, the average cost of goods in Country B increases by 7%. Country B has had 2-point higher levels of inflation than Country A over that year. RPPP states that this 2-point difference should lead to a two-point shift in the exchange rate between the two countries. Country A’s currency should appreciate at 2% annually, while Country B’s currency should likewise depreciate at 2% annually.

RPPP is calculated as follows: