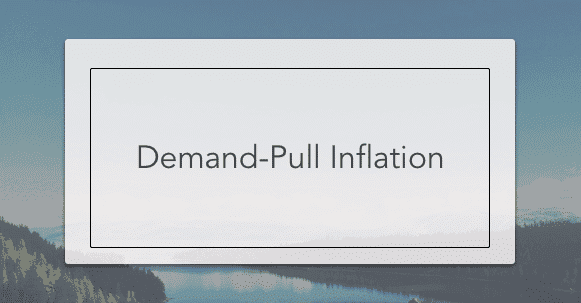 More accurately, it should be described as involving “too much money spent chasing too few goods,” since only money that is spent on goods and services can cause inflation. This rise in price level is not expected to happen unless the economy is already at a full-employment level. The term demand-pull inflation is mostly associated with Keynesian economics.

For example, if aggregate demand is rising at 3%, but the productive capacity is only rising at 2%. Thus, firms will see that demand is outstripping supply and will respond by increasing prices. As firms produce more, they will hire more workers. This hiring spree will cause a fall in unemployment. This increased demand for workers puts upward pressure on wages, leading to wage-push inflation. Finally, higher wages increase the disposable income of employees, leading to a rise in consumer spending.

The effect of inflation will depend on how steep the Aggregate Supply curve is, as in how close it is to full employment. The closer it is, the higher the rise in inflation. This effect can be seen more clearly in the Keynesian Aggregate Demand curve.

If there is a sharp increase in consumption and investment along with extremely positive businesses atmosphere, then there will be a rise in Aggregate Demand.

A depreciation of the exchange rate increases the price of imports and reduces the price of a country’s exports. Consumers will buy fewer imports, while exports grow. There will be an increase in Aggregate Demand.

An enormous increase in government spending will drive up Aggregate Demand.

The expectation that inflation will rise often leads to a rise in inflation. Workers and firms will raise their prices to ‘catch up’ to inflation.

If there is excessive monetary growth – when they are too much money in the system chasing too few goods. The ‘price’ of a goodwill thus increase.

We can take an example of a small country named Staples with a landmass of just 100 square miles. Despite its historically impressive growth rate, Staples now faces an aging workforce and declining infrastructure. A few years ago, the inflation rate was 3%. However, the data now suggest that the country is falling behind on its growth target.

The central bank of Staples is eager to maintain the growth rate. The central banks decide to enact an aggressive expansionary monetary policy. It decreased the discount rate to push interest rates down, purchased government bonds, decreased required reserve ratios, and let the commercial banks loosen credit standards. These policies resulted in a massive increase in consumption. The country’s demand for cars and refrigerators increased to 5,000 vehicles per month and 3,000 refrigerators per quarter, respectively. However, the country could only produce 2,000 cars per month and 1,500 refrigerators per quarter.

Staples is now experiencing Demand Pull inflation. The decline in growth rate was due to an aging population and decaying infrastructure. The problem could only be solved by improving the skills of the workforce and by investing in the infrastructure. By employing an expansionary monetary policy, the excess money increased demand, without increasing the capacity.

To counter demand pull inflation, governments, and central banks would have to implement a tight monetary and fiscal policy. Examples include increasing the interest rate or lowering government spending or raising taxes. An increase in the interest rate would make consumers spend less on durable goods and housing. It would also increase investment spending by firms and businesses. In demand pull inflation, Aggregate Demand D is rising too fast, so these contractionary policies would lower the rise, meaning inflation would still occur but at a lower rate.

In the diagram above, with a tight monetary and fiscal policy, Aggregate Demand shifts from AD1 to AD*, instead of AD2 (a higher rate of inflation). This leads to an equilibrium price level of P* and output Y*, instead of P2 and Y2.