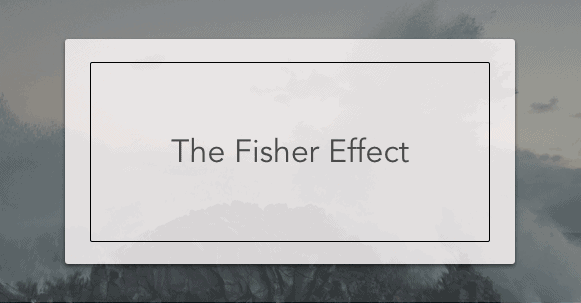 The result, in practice, is that as inflation rates go up, real interest rates go down, when nominal rates don’t increase at rates equal to those of inflation. This effect is not always immediately visible, but over time, it is a consistent economic pattern.

Here is the fisher effect equation described above again, in the most simplified terms:

If, for instance, inflation is 4% annually and the nominal interest rate is 10%, every dollar in the bank becomes $1.10 next year. But because inflation is 4%, that $1.10 can only purchase 6% more goods and services (rather than 10%), which makes the real interest rate 6%. Here it is plugged into the equation above:

The Link between Inflation and Nominal Interest Rates

Limitations of the Fisher Effect

One significant limitation of this concept is when liquidity traps occur (when savings rates are high and interest rates are low, and consumers refrain from the use of bonds), lowering nominal interest rates may not sufficiently help to increase spending and investment.

Another issue is the elasticity of demand with regard to interest rates–when assets are increasing in price and when consumer confidence is high, having high real interest rates will not necessarily decrease demand, so central banks would have to increase the real interest rate further in order to do so.

Finally, sometimes the interest rates that banks use differs from the base rate decided upon by central banks.

Importance with Regard to Money Supply