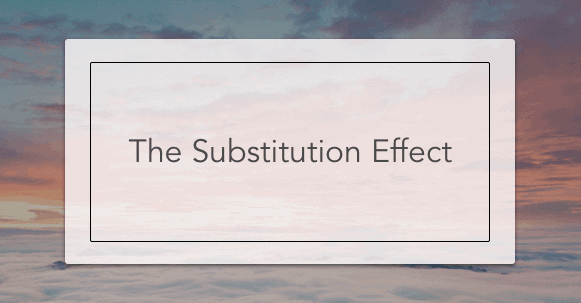 The Substitution Effect is the effect of a change in the relative prices of goods on consumption patterns. It is the economic idea that as either prices rise or income decreases, consumers substitute cheaper alternatives for more expensive goods

The substitution effect is harmful to economic prosperity overall because it limits the breadth of options and opportunities available to both consumers and producers.

But then the price of the orange juice decreases in cost to only $0.50 per bottle. As a result, one bottle of apple juice is now equal in cost to ten bottles of orange juice.

According to the income effect, as purchasing power increases, consumers replace cheaper and lower-quality goods and services with costlier, better-quality options.

Purchasing power can increase for a number of reasons: income and wealth increases, changes in prices (price decreases lead to greater purchasing power), and other factors like currency fluctuation.

Individually, it’s impossible to say whether the income effect or substitution effect dominates because it’s dependent on the mind of the individual and their own tendencies.

For example: if you are working at an entry-level job for just $8 per hour, and your wages increase, your behavior will probably be governed by the substitution effect—you will probably choose to work more. By contrast, if you have been working for many years and are promoted, your behavior might be governed by the income effect—it wouldn’t be surprising if you took this as an opportunity to work fewer hours.

However, some studies show that on the whole, the substitution effect overtakes the income effect. This is because the price elasticity of the labor supply is positive—when prices rise, supply increases (and when prices fall, supply decreases).

Income and Substitution Effect for Wages

In cases where the substitution effect is more profound than the income effect, people will work more (up to lines W1 and Q1 in the diagram above). But there is a particular wage level at which workers will choose to work fewer hours because they can comfortably afford to do so while maintaining their standard of living. Thus, above line W1, the income effect is stronger.

1 thought on “The Substitution Effect”