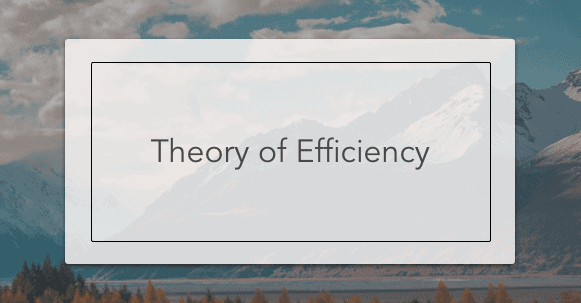 There are three different Theories of Efficiency that we are going to focus on. The first Theory of Efficiency is Pareto efficiency or Pareto optimality. The second is the Kaldor–Hicks improvement, and lastly the Zero-profit condition or Zero Profit Theorem.

Pareto Efficiency or Pareto optimality is a Theory of Efficiency in which given an initial allocation of goods among a set of individuals a change to a different location that makes at least one individual better off without making any other individual worse off is called a Pareto improvement. An allocation is defined as “Pareto Efficient” or “Pareto Optimal” when no further Pareto improvements can be made.

In the Zero Profit Theorem, the entry into a competitive industry will continue until all opportunity for positive economic profit is reduced to zero.

In the original case of inefficiency below, a Pareto/Kaldor improvement is possible. The efficient outcome is Demand A = Demand B = $11, shown by the dotted horizontal line.

1 thought on “Theory of Efficiency”