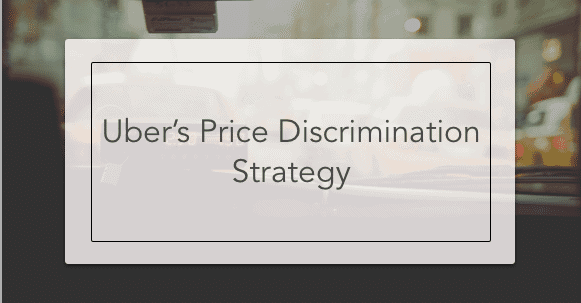 As of December 2014, Uber was available in 53 countries and more than 200 cities worldwide. Back in 2009, when Travis founded Uber, it started off only with ‘black cars,’ i.e., private limos.

In 2012, Uber launched the UberX program which allowed almost anyone to sign up as a driver. The UberX program substantially increased Uber’s popularity and contributed to why Uber is one of the fastest-growing and most valuable startups in the market.

Uber employs two different strategies to maximize how much consumers are willing to spend (i.e., capturing the excessive and otherwise unattainable consumer surplus).

Update: As of June 2016, Uber stopped showing the rider how much surge pricing is going on. Instead, the app now says “fares are higher due to increased demand.” Uber also removed the option to notify riders when surge pricing stopped.

Uber’s Surge Pricing is a classic Supply and Demand problem. As Uber explains it, “with surge pricing, Uber rates increase to get more cars on the road and ensure reliability during the busiest times. When enough cars are on the road, prices go back down to normal levels.”

By simply increasing the price, Uber encourages more drivers to get on the road, till there is enough supply. Many people have protested against this since it exploits people during emergencies or holidays. However, this is not very different from an airline or hotel increasing prices as seats or rooms fill up.

This is what I believe to be the real genius of Uber’s strategy. By creating multiple lines of service that perform the same function, Uber is able to service a very massive income range.

From the UberX at the lower end to Uber LUX, Uber can successfully price discriminate at five price levels in Los Angeles. Price Discrimination occurs when a firm sells a good or service to different buyers at two or more different prices, for reasons not necessarily associated with cost. Price discrimination results in higher revenue for the firm. For example: Hotel rooms, airline tickets, professional services all offer different prices for different customers.

For example: when you are paying for a seat on an airline, the airline offers different prices for different seats in various locations. Because some people are willing to pay more, the airline taps the extra consumer surplus by charging them more and providing a slightly different service. However, in economics there is no difference between a seat in business class or economy, they both offer the same type of service; taking people from one location to another.

Now with UberPool, Uber is able to lower the prices even further.

Uber is able to control all of these conditions and is betting that people are willing to pay a lot more for a nicer car.