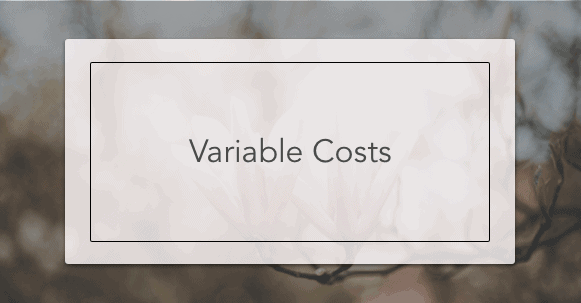 Costs can be divided quite simply into two basic categories: variable costs and fixed costs.

This is in contrast to fixed costs, which exist independently of output and thus remain the same regardless of output (examples include rent, machinery, insurance, and so forth). In the case of insurance, for instance, regardless of the volume of goods produced and sold, companies must pay their insurance costs.

Fixed costs are not absolutely static, and can change; they are only fixed in that these changes are not correlated with production levels. There are also semi-variable costs, which are a more complex combination of variable and fixed.

The most common types of variable costs include:

In this example, we’ll assume that a clothing company spends $10 to make a single T-shirt. This cost can be broken down into the materials and labor needed to create each T-shirt: $4 required for raw materials (thread and fabric) and $6 for labor (cutting the fabric and sewing the single T-shirt). Here is a clear explanation of how the costs change with production output—in other words, how the company’s costs increase as they make more T-shirts:

How do you Find the Variable Cost?

Let’s plug our T-shirt example into the formula above. Here is the variable cost of producing ten T-shirts:

Calculating the variable cost per unit

Conversely, to calculate the variable cost per unit, you must add up your variable cost and then divide by the number of units. That formula looks like:

Again, if we apply this to our T-shirt example, here’s how that looks:

These calculations become significantly more complicated when you add fixed and semi-variable costs into the mix. However, variable costs alone operate linearly, which makes them easy to understand.