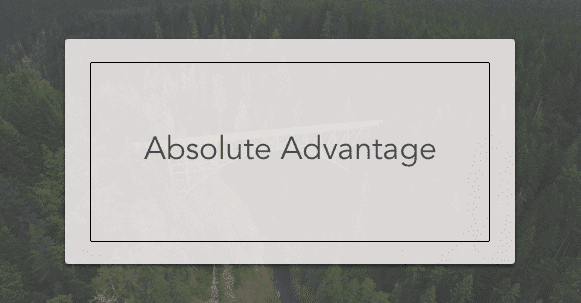 Furthermore, when a producer has an absolute advantage, it also means that fewer resources and less time are needed to provide the same amount of goods as compared to the other producer. This greater overall efficiency in production creates an absolute advantage, which allows for beneficial trade—this is because producers are able to specialize and then, through trade, benefit from other producers’ specialization.

1. Lack of Mobility for Factors of Production

Adam Smith assumes that factors of production cannot move between countries. This assumption also implies that the Production Possibility Frontier of each country will not change after the trade.

There are no barriers to trade for the exchange of goods. Governments implement trade barriers to restrict or discourage the importation or exportation of a particular good.

Smith assumes that exports must be equal to imports. This assumption means that we cannot have trade imbalances, trade deficits, or surpluses. A trade imbalance occurs when exports are higher than imports or vice versa.

However, if there were economies of scale, then it would become cheaper for countries to keep producing the same good as it produced more of the same good.

The two concepts are undoubtedly related but are also distinct. Absolute advantage refers to situations wherein one firm or nation can produce a given product of better quality, more quickly, and for higher profits than can another firm or nation. Comparative advantage, by contrast, looks at international trade more broadly—it accounts for the opportunity costs of choosing to manufacture multiple kinds of products using finite resources.

In our absolute advantage example, we assume that there are two countries, which are represented by a blue and red line. They are called Blue Country and Red Country respectively.

To keep things simple, we also assume that only two goods are produced. They are Good A and Good B. From the table below, we can determine how many hours it takes to create one product.

Consider this table, which gives hours required to produce one unit of Good A and Good B by Blue and Red country:

The Blue country has an Absolute Advantage in the production of Good A (2 hours). Blue county has an absolute advantage because it takes fewer hours to produce a unit of Good A than Red country, which takes 10 hours.

Red Country takes fewer hours to produce Good B (4 hours). Therefore Red Country has an Absolute Advantage in the production of Good B.

As a result, Blue Country will be better off if it specializes in the production of Good A.

Red Country will be better off if it specializes in Good B.

As you can see from our example, it makes sense for businesses and countries to trade with one another. All countries engaged in open trade benefit from lower costs of production.