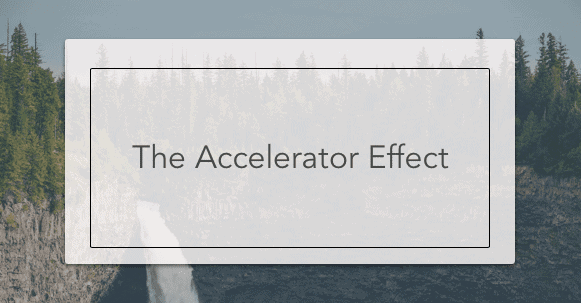 The Accelerator Effect, a Keynesian concept, is used to explain the level of investment in an economy. The accelerator effect refers to a positive effect on private fixed investment of the growth of the market economy. Investment is a function of changes in National Income, especially consumption. Investment is a key component of aggregate demand.

What is the Accelerator Effect?

When income and therefore people increase their consumption of goods, more goods will have to be pro­duced. This expansion will require more capital to produce them if the existing stock of capital has been entirely used. If this is the case, then the investment is induced by changes in income or consumption to increase capacity. This is known as induced investment.

Businesses tend to make bigger investments than incrementally smaller ones so they have to be certain that the economic conditions can be sustained before investing. Additionally, any large investment in capital infrastructure can take years to materialize, therefore, there will be a time lag between demand and capital investment.

If National Income is constant, the investment will be consistent.

The assumption behind the Accelerator Effect is that firms will want to main a fixed capital to output ratio, meaning that if a factory uses 1 machine to produce 1000 goods, and the firms need to produce 3000 goods more, then the firm will buy 3 more machines.

Example of the Accelerator Effect

In 2021, there was a significant shortage of computer chips. This was largely due to COVID-19 where demand for automobiles, in particular, was expected to fall and manufacturers began canceling their orders. Instead, the opposite happened and demand rose. This led to an increase in investment and the Senate even passed the CHIPS for America Act, which proposes substantial financial incentives to increase the production of semiconductors in the United States.

Firms can use existing stock to make up for a temporary rise in demand. They will not add more machinery or increase capacity if they can simply use up existing stock and they don’t believe that the demand will be sustained.

2. The Capacity of Existing Machines

If the firms’ forecasted demand is true, they wouldn’t need to invest in more machines.

Prices of machines could go up with an increase in demand, which could reduce investment in the machines.

5. The Capacity of Other Factors of Production

Even if machinery is there, skilled workers or other factors of production might not be available to make up the needed capacity.

Machines might last longer than expected, therefore reducing the need for investment.

Firms can give out orders to other firms instead of buying new machines.

Implications of the Accelerator Effect

Investment spending can fall even when GDP is rising. This is because if there is a fall in the rate of economic growth firms may invest less. If GDP falls then investment can fall significantly.