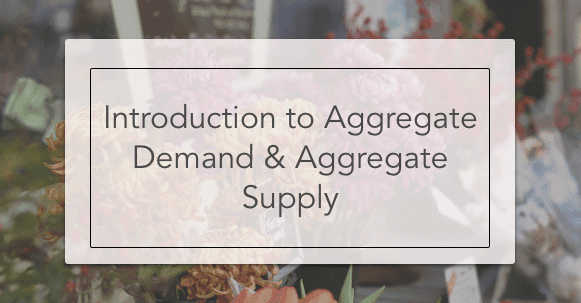 Aggregate Supply And Demand provide a macroeconomic view of the country’s total demand and supply curves.

Aggregate demand (AD) is the total demand for final goods and services in a given economy at a given time and price level.

Aggregate Demand is the total of Consumption, Investment, Government Spending and Net Exports (Exports-Imports). Aggregate Demand = C + I + G + (X – M). It shows the relationship between Real GNP and the Price Level.

When domestic prices increase, then demand for imports increases (since domestic goods become relatively expensive) and demand for export decreases.

When inflation increases, real spending decreases as the value of money decreases. This change in inflation shifts Aggregate Demand to the left/decreases.

If consumers expect inflation to go up in the future, they will tend to buy now causing aggregate demand to increase or shift to the right.

While, the Aggregate Supply is the total of all final goods and services which firms plan to produce. during a specific time period. It is the total amount of goods and services that firms are willing to sell at a given price level in an economy. There are two views on Long Run Aggregate Supply, the Monetarist view and the Keynesian view. The curve is upward sloping in the short run and vertical, or close to vertical, in the long run.

Investment, technology changes that result in productivity improvements and positive institutional changes can increase short-run and long-run aggregate supply. Some factors can only affect Aggregate Supply in the short run.

Adverse supply shocks shift AS to the left, i.e., a decrease in the AS curve. Usually, a huge rise in oil prices can cause a supply shock. Natural catastrophes or hikes in taxes can also shift AS to the left. It is either a leftward shift in the short run AS curve (the one on the left) or by the leftward shift in the vertical long-run AS curve. However, the long run AS curve is best suited for natural disasters or setbacks in the economy, such as corrupt governments.

3. Changes in Expectations for Inflation

If suppliers expect goods to sell at much higher prices in the future, they will be less willing to sell in the current period. As a result, the Short Run Aggregate Supply will shift to the left.

Governments can influence AS through Supply Side policies and improvements in health and education services. This result can be better imagined by an increase in the Long Run AS. An increase in natural resources can also shift the AS curve to the right.

Monetarists assume that in the long run there is no unemployment and that the people who want to work, work and the ‘unemployed’ are viewed as voluntarily unemployed. This assumption leads to the concept of “Full Employment” where all factors of production are fully and efficiently employed.

On the other hand, Keynesians believe that unemployment is involuntary, and is caused by tight fiscal policy and monetary policy. If demand for labor goes down, the effect isn’t the same as the Monetarist view. Wages are “sticky” downwards, meaning that wages can’t fall as much because of minimum wage laws, trade union pressure, and because of the cost of hiring and firing workers.