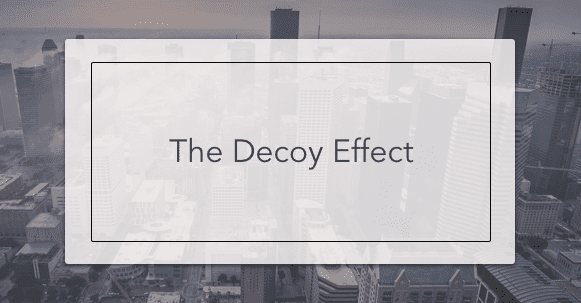 The Decoy Effect or the Asymmetric Dominance Effect is a cognitive bias in which consumers will tend to have a specific change in preferences between two options when also presented with a third option that is asymmetrically dominated.

Simply put when there is a third strategically important choice, aka the decoy, then the consumer is more likely to choose the more expensive of the other two options.

Now suppose that a new player, C, is added to the market; it is more expensive than both A and B and has more storage than B but less than A:

The addition of C, which consumers would presumably avoid, given that they can pay for a model with a lower price and more storage. This difference causes A, the dominating option, to be chosen more often than if only the two choices in Consideration Set 1 existed. Option C affects consumer preferences by acting as a basis of comparison for A and B. Because A is better than C in both respects, while B is only partially better than C, more consumers will prefer A now than did before. C is, therefore, a decoy whose sole purpose is to increase sales of A. Thus, we have a decoy effect.

Conversely, suppose that instead of C, we introduce player D that has less storage than both A and B, and that is more expensive than B but not as expensive as A:

The result here is similar: consumers will not prefer D because it is not as good as B in any way. However, whereas C increased preference for A, D has the opposite effect, increasing preference for B. Thus, we have a decoy effect.