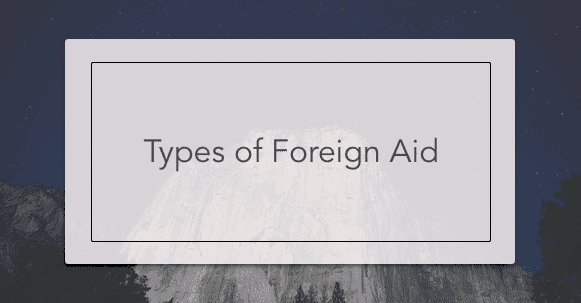 Foreign aid is defined as the voluntary transfer of resources from one country to another country. This transfer includes any flow of capital to developing countries. A developing country usually does not have a robust industrial base and is characterized by a low Human Development Index (HDI).

Foreign aid can be in the form of a loan or a grant. It may be in either a soft or hard loan. This distinction means that if repayment of the aid requires foreign currency, then it is a hard loan. If it is in the home currency, then it’s a soft loan. The World Bank lends in hard loans, while the loans of its affiliates are soft loans.

The U.S. spends roughly $50.1B in foreign aid each year which is only 1.2% of the Federal government’s budget.

Foreign aid may be given as a signal of diplomatic approval, or to strengthen a military ally. Other reasons to give foreign aid include to reward a government for behavior desired by the donor, to extend the donor’s cultural influence, to provide the infrastructure needed by the donor for resource extraction from the recipient country, or to gain other kinds of commercial access.

US Aid may often time buy assistance for American citizens in that nation, alter the course of government laws or something similar in a way that benefits US interests.

In the case of Peru back in the 1990s, Peru conspicuously changed its policies of not allowing religious missionaries in the country or even jailing them upon arrival. After a promise of aid to bail out the Peso, suddenly Mormons and other groups had access to the nation without harassment.

Assistance given by a government directly to the government of another country is Bilateral Aid. It is when the capital flows from a developed nation to a developing country. Strategic political considerations and humanitarian ones often direct Bilateral Aid. These are to assist in long-term projects to promote democracy, economic growth, stability, and development.

Multilateral Aid is assistance provided by many governments who pool funds to international organizations like the World Bank, United Nations, and the International Monetary Fund. These funds are then used to reduce poverty in developing nations. Though this sector constitutes a minority of the US’s foreign aid, the nation’s contributions make up a significant percentage of the donor funds received by the organization.

Tied Aid is one of the types of foreign aid that must be spent in the country providing support (the donor country) or in a group of selected countries. A developed country will provide a bilateral loan or grant to a developing country, but mandate that the government spends the money on goods or services produced in the selected country.

Project aid is when the funds are used to finance a particular project, such as a school or a hospital, it is considered to be Project Aid.

Military aid is never charitable. The U.S. gave about $15 billion in Military Aid in 2011. Military aid usually requires the receiving nation to either buy arms or defense contracts directly from the USA. In other cases, it just simplifies the process by having the federal government only purchase the arms itself and ship them over on military transport.

Voluntary aid is aid usually in the form of charity. For example, Médecins Sans Frontières (Doctors Without Borders) is “is an international humanitarian non-governmental organization best known for its projects in war-torn regions and developing countries affected by endemic diseases”

The economic arguments for not giving foreign aid: