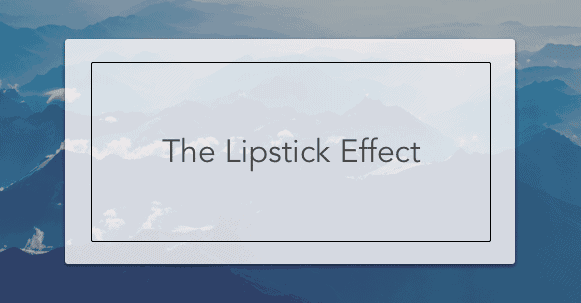 The Lipstick Effect is the theory that when facing an economic crisis or the economy is in a recession, consumers will be more willing to buy less costly luxury goods. For example, instead of buying expensive fur coats, women will instead purchase expensive lipstick or luxury cologne.

Psychology Behind The Lipstick Effect

The underlying implication is that consumers will buy luxury goods even if there is a crisis. When consumer confidence in the economy is low, people will buy goods that fulfill luxury indulgences without breaking the bank. Outside the cosmetics market, consumers could buy expensive beer or pick an Audi over a Ferrari.

Think of it this way; it is much easier on the wallet to go for a nice dinner and movie than fly off to Europe for a summer holiday.

The Economist tested the lipstick effect in 2009 with statistical analysis. They concluded that based on data collected by Kline & Company, a market-research group, the effect had been overstated. The team at the Economist were unable to derive a solid correlation from proving the effect.