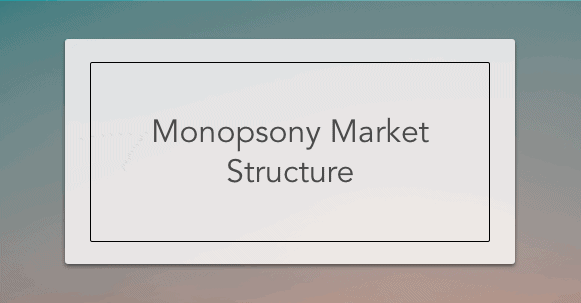 A monopsony is a situation of the market wherein only one buyer exists in a particular area, typically along with many sellers. These sellers end up competing for the buyer’s purchases by lowering their prices.

In the case of both monopsony and the much more well-known situation of monopoly, market conditions are imperfect. However, monopolies describe a situation with one seller/producer of goods/services, and many buyers; conversely, monopsonies involve the other side of the buying and selling equation. Notably, even though monopsony and monopoly differ, companies with monopsony power are often dominant enough that they may also have partial or full monopolies.

Effect of a Monopsony

The main effect of monopsony is that the single buyer in a given industry has control of the market. That buyer has far too much power in setting the price of the goods or services that they alone are buying. This can be quite problematic for the economy, and so ought to be avoided.

Since so many sellers are competing to sell to that buyer, sellers have no choice but to lower their prices to remain competitive. That’s why the buyer’s controlling advantage has the effect of lowering the cost of the good.

One example of this market situation is that of large supermarkets. Because they are dominant buyers, they have an advantage over suppliers in the market and can drive down the prices they pay to suppliers. This is a very effective strategy in increasing their profits. For instance, when farmers are paid low prices for eggs, they often lack the option to seek out other buyers for their products. There are too few buyers of bulk amounts of eggs or other such perishable goods (because these goods must be sold relatively quickly, this restricts farmers’ options even further).

Monopsonies are also very common in the labor market. Since workers sell their labor, a single employer hiring for an entire industry can effectively drive wages down. After all, workers who refuse to accept these lower wages have no alternative to get hired; only workers who willingly accept low wages end up being employed in that industry. In monopsonies, an employer’s advantage over the entirety of the workforce turns wages into a kind of “race to the bottom.” This is hugely problematic because it worsens poverty and inequality.

How A Monopsony Affects Wages

A company hires the number of workers where the marginal revenue product (MRP) is equal to the marginal cost of labor—Q2 represents the number of workers in the graph. This is the level at which the company’s profit is maximized. If there wasn’t a monopsony and workers had other employment options, workers who were paid only P2 would have the option to quit and seek out the companies who pay more money. In a monopsony, however, they do not have that choice. In this way, monopsonies keep wages low.