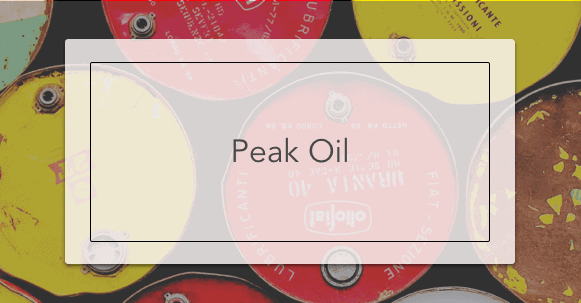 What is Peak Oil?

Peak Oil is a theoretical point in time after which the production of oil is expected to decline permanently because the industry has reached the maximum rate of extraction. The theory of Peak Oil was developed by a geologist named M. King Hubbert in 1956. He predicted that US peak oil would occur in the 1970s.

In the 1970s US oil production had reached 9.6 million barrels per day and then continued to decline for the next thirty years. However, thanks to the discovery of new fields and technological developments like hydraulic fracking pushed the timeline for peak oil even further back.

As oil becomes scarcer, and as the Laws of Demand tell us, the price of oil will continue to rise. To combat this, on the demand side, we can try to find substitutes to use instead of oil. While on the supply side, we can either try to find more reserves or come up with more substitutes. We would only run out of it if there were no demand left for fossil fuel.

While these are arbitrary numbers, this graph implies that future generations’ demand for fossil fuel has already been considered. In the above graph, at $5 Da (today’s generation) will consume 20 units. The line Db shows that tomorrow’s generation will consume ten units. Their total demand is 30 units.

Then we take the present value of the next period’s demand for fossil fuel and discount it to today.

We then take the sum of the present value of demand for petroleum over multiple periods of time.

P1 represents the future price of oil that D1 will pay. The vertical line represents the limited supply of petroleum. Hence this graph implies that it is inexhaustible, i.e., that we can never run out.

After combining the two concepts, we can see that we already been the future demand for oil at today’s price and that we would never really run out.

And if people did think we could run out of it, then they would save it and sell it after “oil ran out.” And everyone would do that to the point that we would never actually run out.