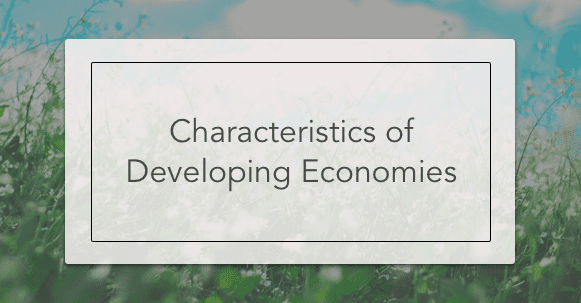 It means the average person doesn’t earn enough money to invest or save money. They spend whatever they make. Thus, it creates a cycle of poverty that most of the population struggles to escape. The percentage of people in absolute poverty (the minimum income level) is high in developing countries.

Another common characteristic of developing countries is that they either have high population growth rates or large populations. Often, this is because of a lack of family planning options and the belief that more children could result in a higher labor force for the family to earn income. This increase in recent decades could be because of higher birth rates and reduced death rates through improved health care.

Almost 75% of the population of low-income countries is rurally based. As income levels rise, the structure of demand changes, which leads to a rise in the manufacturing sector and then the services sector.

5. Dependence on Exports of Primary Commodities

2 thoughts on “Characteristics of Developing Economies”