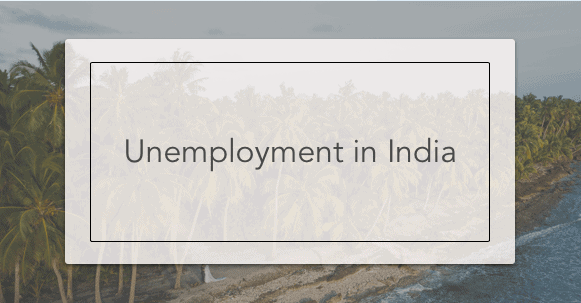 Unemployment in India is a complex problem with numerous overlapping and intertwined causes; however, it is possible to identify several key causes. This article will attempt to describe and outline these causes, which vary from macro-level factors (e.g. overall slow economic growth as well as population increases) to more micro-level factors (e.g. the joint family system of business). Understanding the causes of unemployment is the first step in beginning to rectify this major problem and creating a society in which everyone is able to find a sustainable livelihood for themselves and their families.

According to the Centre for Monitoring Indian Economy (CMIE), an economics and business think-tank, as of January 2023, unemployment in India was 7.2%. That means tens of millions individuals are looking for jobs. The lowest unemployment rate in India was 3.4% (July 2017).

Causes of Unemployment in India

This list captures many of the major causes of high unemployment in India but is not entirely exhaustive. There are further factors contributing to this problem as well, many of which may not yet have been identified.

The following are the main causes of unemployment:

The caste system—a structure of social stratification that can potentially pervade virtually every aspect of life in India—is a major factor in generating unemployment. In some locations, certain kinds of work are prohibited for members of particular castes. This also leads to the result that work is often given to members of a certain community rather than to those who truly deserve the job—those who have the right skills. The result is higher levels of unemployment.

Increases in population have been considerable over the half-century. The country’s overall population is made up of more than 1.3 billion people, second only to that of China. Moreover, India’s population is predicted to exceed China’s by the year 2024; it will, furthermore, probably be the most populous country for the entirety of the 21st century. As the country’s economic growth cannot keep up with population growth, this leads to a larger share of the society being unemployed.

Because the Indian economy is relatively underdeveloped, economic growth is considerably slower than it might otherwise be. This means that as the population increases, the economy cannot keep up with demands for employment and an increasing share of people are unable to find work. The result is insufficient levels of employment nationwide.

Similarly, while industrialization has been considerable, its rate of growth is nevertheless fairly slow. There is a major emphasis on industrialization nationwide, which has elevated the Indian economy; however, industrial growth continues to generate relatively few new jobs overall as compared to increases in population.

Agriculture offers unemployment for a large segment of the population, but only for several months out of the year. The result is that for a considerable portion of the year, many agricultural workers lack needed employment and income. More stable sources of income are essential to permit the fulfillment of basic needs.

Large family businesses may often involve family members who depend on the family’s joint income but do not contribute substantive work. Although these individuals may appear to be working, they may not actually add anything to the business. The result is that their unemployment is “disguised.”

Thus the joint family system may contribute to low productivity. However, this system also offers numerous positive benefits as a social and economic safety net in which those who cannot find work elsewhere can derive support from their families and contribute to their business. It’s likely, then, that this system may offer more benefits than drawbacks.

Industrial development has made cottage and small-scale industries considerably less economically attractive, as they do not offer the economies of scale generated by large-scale mass production of goods. Oftentimes the demand for cheap, mass-produced goods outweighs the desire for goods that are handcrafted by those with very specific skill and expertise. The result is that the cottage and small-scale industry have significantly declined, and artisans have become unemployed as a result.

8. Low Rates of Saving and Investment

India lacks sufficient capital across the board. Likewise, savings are low and the result is that investment—which depends on savings—is also low. Were there higher rates of investment, new jobs would be created and the economy would be kickstarted.

9. Shortage of Means of Production

Production is, quite simply, limited by the amount of materials, equipment, and energy available to fuel it. Shortages of raw materials, facilities, fuel, and electricity means decreased production of goods, which logically results in decreased availability of jobs.

This is a major source of unemployment in India. Problematically, there were no nationwide plans to account for the significant gap between labor supply (which is abundant) and labor demand (which is notably lower). It is crucial that the supply and demand of labor be in balance to ensure that those who need jobs are able to get them; otherwise, many individuals will compete for one job.

Thus far, this article has primarily addressed working-class unemployment, as this affects the majority of the population. However, the numbers of white-collar workers have increased as well. This is due in part to the fact that the number of universities in India has increased in recent decades—currently, there are roughly 385 universities throughout the country. The result is that more people are educated and become white-collar workers, while unfortunately, the supply of white-collar jobs does not match their numbers.

In recent years, less than half—only 39%—of India’s total cultivable land has access to irrigation. This means, then, that large areas of land can only grow one crop per year. Many farmers are unemployed for the majority of the year, during this off-season, due to lack of irrigation facilities.

Culturally, attachment and maintenance of proximity to family is a major priority for many Indian citizens. The result is that people avoid traveling long distances from their families in pursuit of employment. Additionally, language, religion, and climate can also contribute to low mobility of labor. As one might expect, when many of those who might otherwise be suited to jobs are unable to travel to reach them, unemployment is magnified.

4 thoughts on “Unemployment in India”