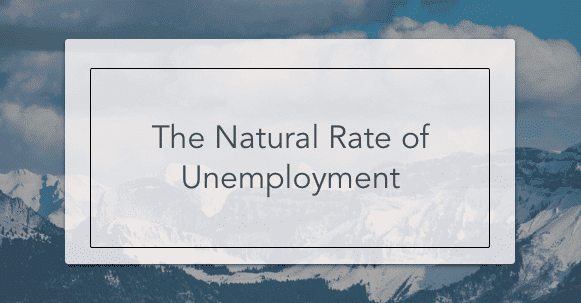 Data on the NRU in the US can be found on FRED.

The Natural Rate of Unemployment Equilibrium

In the diagram above, the Labor Demand curve represents how many workers firms are willing to hire at a given real wage. While the Labor Force (LF) curve represents the number of workers willing to work at a given real wage. The LF1 curve shows the number of accepted jobs because of the assumption that people don’t generally accept the first job they are offered, and they keep searching for a better job offer.

The labor market equilibrium is where LF1 and Labor Demand intersect.

The horizontal distance (labeled NRU) between LF1 and Labor Force decreases as real wage increases because, at higher wages, it is more likely a person would accept it without looking for another job. This distance also represents people in between positions, since they are still a part of the labor force.

Lowering the Natural Rate of Unemployment

1. Reform welfare benefits to reduce the risk of the “poverty trap”, where people are unable to escape poverty.

2. Reform trade unions to reduce their collective bargaining power to make it easier to hire and fire people.

3. Reduce some of the barriers to labor mobility to make it easier for workers to move around the country in search of new job opportunities.

4. Reduce the income tax for employees, which should improve the incentive to look for and accept paid work.