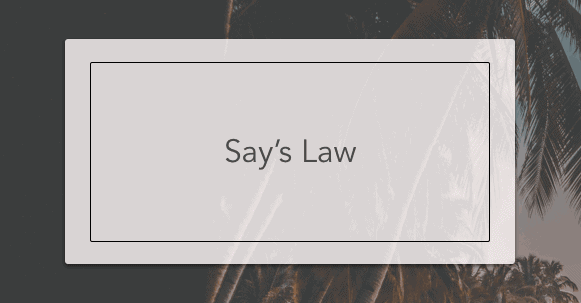 People are paid to create goods and/or services, and can then spend that money on other goods/services. And there’s no point in holding onto money for long periods without spending it because then its value is likely to decrease with inflation. So: anytime goods are manufactured or services are rendered, people are paid money, which leads to greater demand. Thus, aggregate production level leads to equal aggregate demand.

The concept of Say’s Law is part of classical economics and was created by pro-laissez-faire economist Jean-Baptiste Say (1767–1832) near the turn of the 19th century.

Say’s Law of Markets is most poetically summarized by Say himself: “It is worthwhile to remark that a product is no sooner created than it, from that instant, affords a market for other products to the full extent of its own value. Thus the mere circumstance of creation of one product immediately opens a vent for other products.” Other classical economists expanded on Say’s work, including well-known figures like James Mill (1773–1836) and David Ricardo (1772–1823).

Say’s Law also has strong implications for what governments ought to do in the sphere of economic policy. Rather than adhering to mercantilist policies, which are based on the belief that money is the foundation of wealth, Say’s Law makes a stronger case for laissez-faire economics.

John Maynard Keynes (1883–1946)—creator of the influential Keynesian school of economics—disagreed with Say’s Law. He lived through the Great Depression, which demonstrated that there can be more production than there is a demand for goods. Keynes asserted that governments must actively encourage demand (using tactics like printing money and fiscal policies oriented toward the expansionary). Otherwise, some resources are destined to go unused (e.g. as a result of hoarding money during economically challenging periods).

Other, related criticisms of Say’s Law: