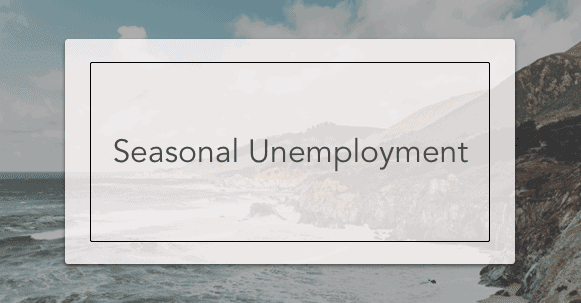 Many workers adapt to seasonal unemployment by working quite a bit when demand is high and saving up much of their earnings, then living off of those savings during their seasons of unemployment.

Seasonal unemployment is an especially significant issue in tourist destinations, where the economy is primarily dependent on tourism. For instance, some tourist destinations are attractions primarily for their beautiful, sunny beaches. If there’s a time of year when the beaches are cold and rainy, people won’t want to come to visit during that season. Resorts won’t have any reason to have workers (e.g. housekeepers) stay on, and therefore workers will become unemployed during that rainy part of the year when demand is low.

Another common example is that of many kinds of agricultural jobs. Many crops are only grown and harvested at certain points of the year. During the crop’s off-season, farmers’ hired workers will not have any work to do and will, therefore, experience seasonal unemployment at that time.

Pros and Cons of Seasonal Unemployment

Data on Seasonal Employment in the United States

As of June 2018, the national seasonal unemployment rate for the entirety of the United States was 3.8 percent (source).

Here are examples of some rates across various states (note that the availability of recent data varies widely):

Notably, along with seasonal unemployment, there is often seasonal under-use of raw materials used in production. For example, there will most likely be a seasonal peak in the production of warm, waterproof boots during the winter, as there is more demand for such products to protect from cold weather.

Thus, there will be a winter increase and a summer decrease in demand for both rubber (used to construct the boots) and workers (who will actually make the boots).