The Circular Flow of Income

The circular flow of income is illustrated in the circular-flow model of the economy, which is one of the most significant basic models within economics. This model shows how different units in an economy interact, breaking things down in a highly simplified manner. It shows how household consumption is a firm’s income, which pays for labor and other factors of production, and how those firms provide households with income. The circular flow of income demonstrates how economists calculate national income, or gross domestic product (GDP).

The Dual Categories for Economic Actors, Markets, and Cycles

Within this model, all economic actors are placed into one of two categories: households or companies (firms).

The two cycles described above are crucial parts of the basic functioning of a capitalist economy. Central to the concept of the circular flow of income, and what it attempts to represent in the most basic possible terms, is this key idea: that income flows in a cycle as we both purchase goods/services and earn income via labor producing such goods/services.

What Are the Household and Firm Sectors?

The firm sector includes businesses that take on the risk of combining scarce resources to produce goods and services. This sector buys capital goods with investment and pays for the factors of production.

Injections are additions and contributions to the economy through government spending, money from exports, and investments made by firms. Injections increase the flow of income.

Withdrawals are leakages from the economy as a result of taxation, spending on imports, and monetary savings. Withdrawals reduce the flow of income.

The basic model is quite simplified in that it incorporates just two sectors: the household and firm sectors. This makes the circular-flow model easier to understand, but excludes significant elements of the economy that are quite important to understand how it functions in full. These are the three most significant factors excluded from that basic model:

Leakage (see definition above) occurs via banks, when savings by households and businesses are deposited–the money that would have been flowing through the economy and being used is, instead, removed and held. In terms of injections (also defined in the previous section), investment and loans are also facilitated/offered by these institutions, contributing to the household and firm sector.

Circular Flow of Income in the Four Sector Economy

The concept of the four-sector economy incorporates the factor of international trade. International trade includes exports and imports. The four sectors are as follows: household, firm, government, and foreign. The arrows denote the flow of income through the units in the economy. This circular flow of income model also shows injections and leakages. 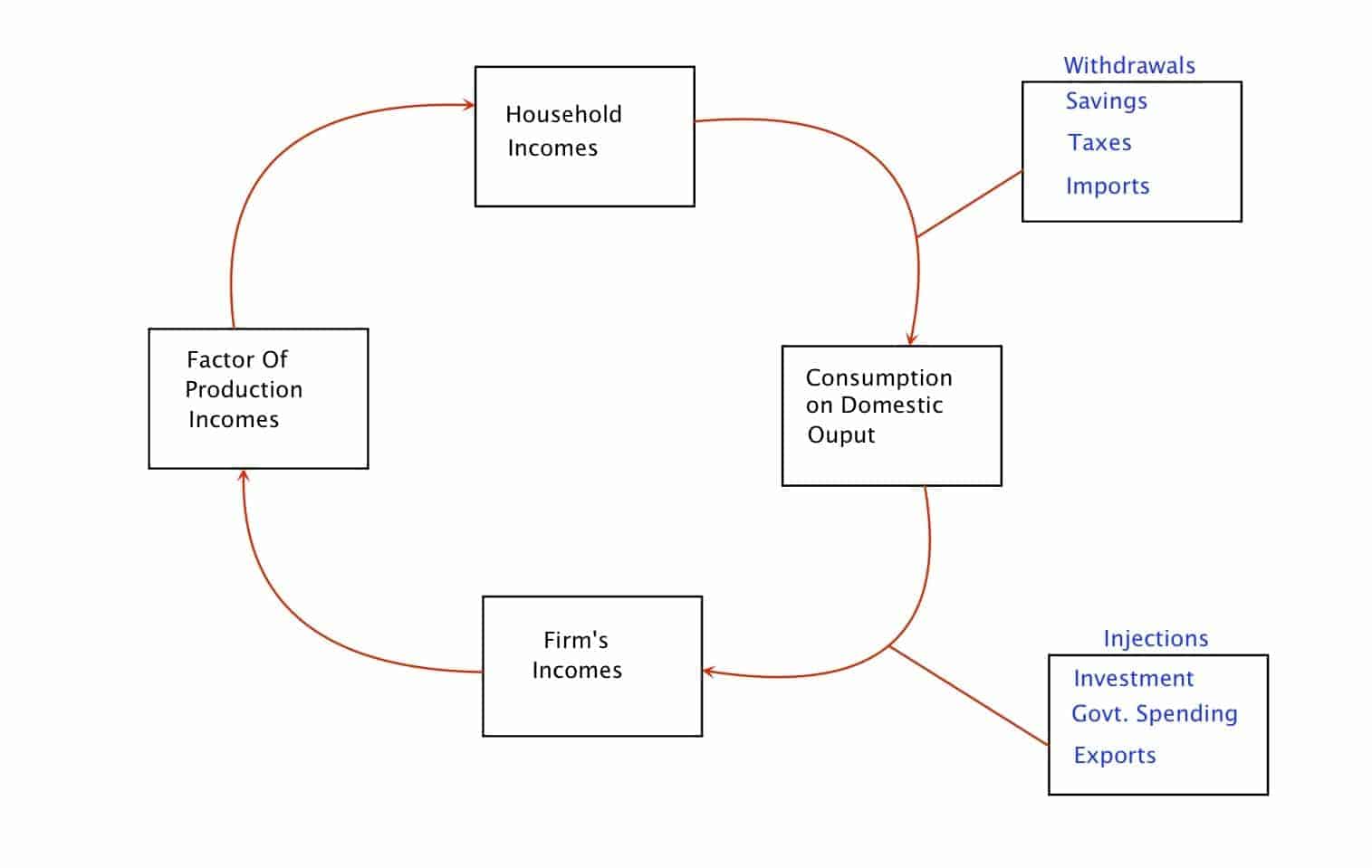