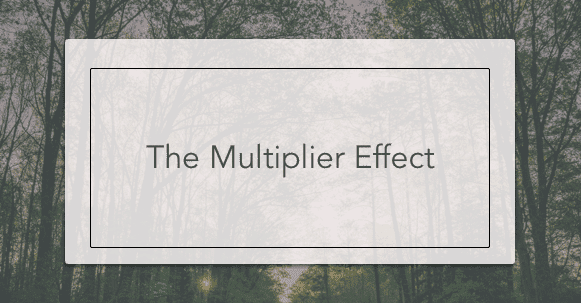 The Multiplier Effect is defined as the change in income to the permanent change in the flow of expenditure that caused it. In other words, the multiplier effect refers to the increase in final income arising from any new injections.

Injections are additions to the economy through government spending, money from exports, and investments made by firms. Injections increase the flow of income. Here are some examples of injections:

An injection of extra income leads to more spending, which creates more income, and so on. It emphasizes the effect of an expansionary fiscal policy. The Multiplier Effect continues until savings = amount injected. (See the Circular Flow Model)

From the diagram above we can see, that an increase in government spending would shift the Aggregate Demand (AD) curve from AD1 to AD2. However, the multiplier effect shifts the AD curve to AD3 instead of AD2.

The reason for this is because one person’s spending is another’s income, so there’s this constant exchange of money that gets spent.

2. MPS – Marginal Propensity to Save

Calculating the Multiplier Effect for a simple economy

Calculating the Multiplier Effect for a complex economy

If the government increases expenditure by $100,000, then the national income or real GDP increases by $100,000. We assume that this money is going towards constructing a new freeway.

However, the $100,000 is only the income for the people who the government pays. In our example, we assume the government hires a firm to construct the road. The company, in turn, pays workers wages. These workers then spend the money.

4 thoughts on “The Multiplier Effect”