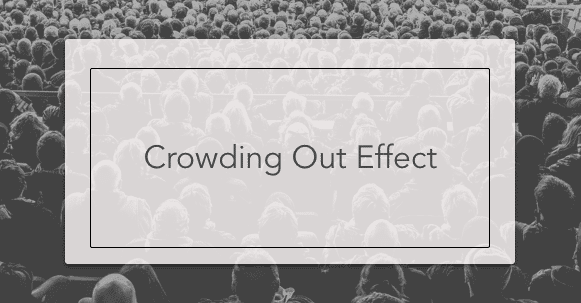 The government is effectively taking a greater and greater percentage of all savings currently usable for investment; eventually, when the interest rate gets high enough, only the government is able to afford the cost of borrowing–private firms are then “crowded out” of the market.

The crowding effect is a monetarist criticism of expansionary fiscal policy. (As a refresher, monetarists are those who primarily attribute shifts in the overall health of the economy to money supply changes; thus, in their eyes, improving economies’ performance is most effectively achieved when governments make smart adjustments to the monetary supply.) The idea gained popularity in the 1970s and 1980s, as economists who valued a free market above all else chose to raise warnings about the increasing portion of the GDP for which the public sector was becoming responsible.

How Does the Crowding Out Effect Work?

When the government of a large country raises its overall borrowing, this can cause a major effect on the economy in the form of a concurrent increase in that economy’s real interest rate. As a result, the economy’s lending capacity is absorbed so that businesses are less likely to want to invest capital in new ventures. This is because firms typically rely on financing in order to be able to afford these kinds of investments; when the opportunity cost of relying on financing (of borrowing money) increases, investments that would be financially worthwhile become excessively costly and therefore unprofitable.

A rise in interest rates would discourage private investors from investing, and private consumption may also decrease as many large purchases are made on credit. So the result could be a rise from AD1 to AD2, instead of AD1 to AD3.

Impact of The Crowding Out Effect

If a government wants to increase spending, it can finance the higher spending in these two ways:

If the government increases the tax on the private sector (for instance, by raising income taxes or increasing corporate taxes), the effect will be that this reduces the disposable income of consumers and firms. All other things remaining equal, raising taxes on consumers will lead to lower consumer spending. Therefore, higher government spending financed by the higher tax should not have the effect of increasing overall aggregate demand because the increase in G (which denotes government spending) is counterbalanced by a decrease in C (which represents consumer spending).

This is an example of the crowding out effect as some economists claim that it occurs. Let’s say there’s a large tech company that is planning to spend $10 million on an investment that they expect to return $12 million, with the assumption that their loans’ interest rate will stay at 3%. The net income, then, is $12 million.

Then, the government releases a stimulus package that ends up raising interest rates–the tech company’s loans would now have an interest rate of 4%, rather than 3%. The interest rate has increased by a third, so the company would have to spend a lot more money to earn the same total return, which decreases their net earnings from the investment. For this reason, the investment stops being financially worthwhile, and the firm decides against making the investment.

1 thought on “Crowding Out Effect”