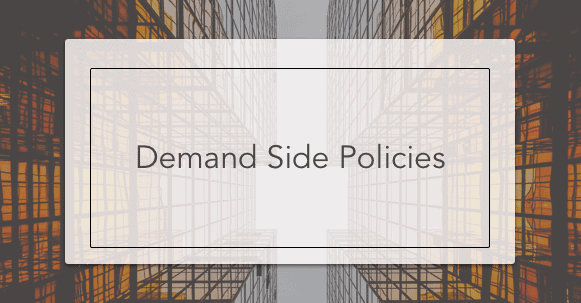 In general, demand-side policies aim to change the aggregate demand in the economy. Aggregate Demand is made up of Consumer Spending + Government Spending + Investment + Net Exports (exports-imports). So anything that affects these factors will affect demand. We tend to use demand-side policies for short-term changes – if inflation is getting too high, we can increase interest rates to cool the economy down.

On the other hand, policymakers also have the option of using Supply Side Policies. These policies are aimed at increasing Aggregate Supply (AS), a shift from left to right. Successful supply-side policies lower the natural rate of unemployment.

Fiscal expansions tend to be politically popular (i.e., more spending and/or less taxes) and thus easier to execute. However, fiscal expansions can make existing deficits worse and add to the national debt, which may not be sustainable. Contractionary policies (spending cuts or higher taxes) tend to be politically unpopular and less likely to be used even if required by economic conditions.

Monetary expansions are often less efficient and less predictable as compared to monetary contractions. For example, if the Central Bank is concerned about weak economic growth or relatively high rates of unemployment. The policy reaction would be to increase bank reserves (excess reserves) through open market purchases. Banks would then be expected to convert these excess reserves into loans with their customers. However, if banks are pessimistic about their future reserve position (expecting higher than usual withdrawal activity or fewer new deposits), they might just sit on these reserves with no change in lending rates.