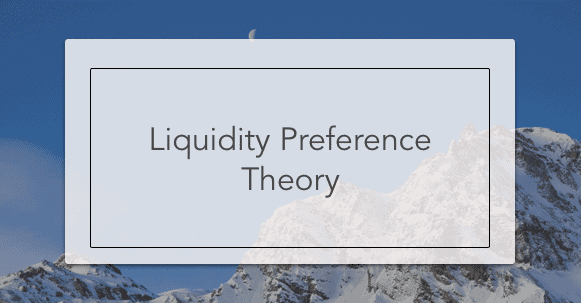 The Liquidity Preference Theory says that the demand for money is not to borrow money but the desire to remain liquid. In other words, the interest rate is the ‘price’ for money.

John Maynard Keynes created the Liquidity Preference Theory in to explain the role of the interest rate by the supply and demand for money. According to Keynes, the demand for money is split up into three types – Transactionary, Precautionary and Speculative.

He also said that money is the most liquid asset and the more quickly an asset can be converted into cash, the more liquid it is.

As we mentioned earlier, Keynes speculated that the demand for money is split up into three types – Transactionary, Precautionary and Speculative.

People prefer to be liquid for day-to-day expenses. The amount of liquidity desired depends on the level of income, the higher the income, the more money is required for increased spending. This is called transactionary demand.

Precautionary demand is the demand for liquidity to cover unforeseen expenditures such as an accident or health emergency. The demand for this type of money increases as the income level increases.

The Theory of Investment

An increase in Money Supply leads to a fall in Interest Rates (the Liquidity Preference Theory denoted by R). This, in turn, leads to higher Investment (Theory of Investment denoted by I) which then results in higher Income (Y) via the Multiplier Effect.

An increase in the money supply leads to, temporarily, higher income levels and employment but in the long run, this only increases the rate of inflation.

The economy returns to the Natural Rate of Unemployment