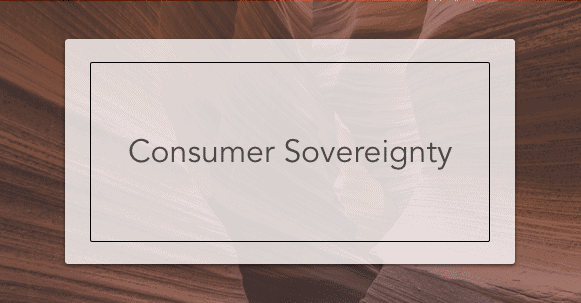 Consumer sovereignty is the theory that consumer preferences determine the production of goods and services. This means consumers can use their spending power as ‘votes’ for goods. In return, producers will respond to those preferences and produce those goods.

In reality, however, producers do produce goods that consumers do not want or introduce new products like the iPod that the consumers did not know they wanted.

Lower-income consumers have limited options because of their lower incomes. Richer consumers have more the luxury of choice. Therefore, consumer sovereignty is limited by the unequal distribution of income.

In theory, producers should be able to produce goods that consumers demand. In reality, a country may not have the infrastructure, technology or natural resources to be able to do so.

Monopolies can override consumer sovereignty because there may not be other choices in the market. This also means the consumer has to purchase at the price decided by the monopoly.

Governments often impose taxes or subsidies to discourage or encourage the consumption of certain goods. In certain cases, governments may simply outright ban the production that products such as opium.

In economics, we assume consumers will always make a rational decision, however, in reality, this isn’t always the case. Decision fatigue is an example of irrational consumer behavior.

Rarely do individual consumers have choices in affecting prices or decisions of the producer. It is the combined demand of many consumers that can only make a difference.

The theory of consumer sovereignty implies that the consumer knows what is best for himself or herself and his or her preferences will decide the allocation of scarce resources in the economy. However, this differs in different types of economies.

For example, in a free market, consumers have the highest levels of consumer sovereignty. The consumer is free to buy any commodity and in whatever quantities his likes.

However, in a command economy, the state or central government decides what to produce.