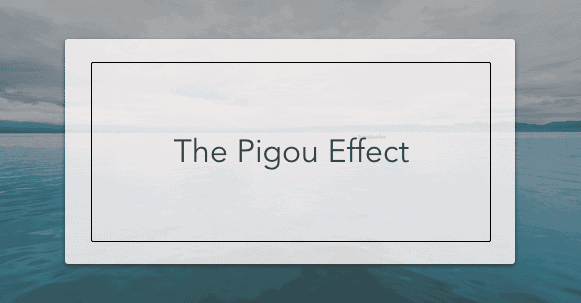 The Pigou effect is an economics term that refers to the stimulation of output and employment. Increasing consumption causes this because of a rise in real balances of wealth, particularly during deflation.

Arthur Cecil Pigou defined real wealth as the sum of the money supply and government bonds divided by the price level. He argued that Keynes’ General Theory was not enough in not specifying a link from “real balances” to current consumption. He stated that the inclusion of such a “wealth effect” would make the economy more ‘self-correcting’ to drops in aggregate demand than Keynes predicted.

Pigou’s Hypothesis and The Liquidity Trap

An economy in a liquidity trap cannot use monetary stimulus to increase output because there is little connection between personal income and money demand. John Hicks thought that this might be another reason (along with sticky prices) for persistently high unemployment. However, the Pigou Effect creates a mechanism for the economy to escape the trap:

Kalecki’s Criticism of the Pigou Effect

The Pigou effect was criticized by Michał Kalecki. The adjustment required would increase the real value of debts, and would consequently lead to wholesale bankruptcy and a confidence crisis.