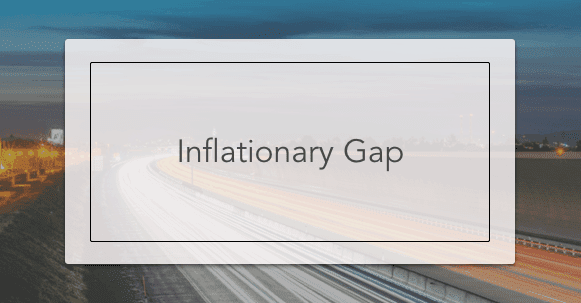 Otherwise known as an expansionary gap, an inflationary gap is the gap between an economy’s full-employment real GDP and its real GDP. In other words, the inflationary gap refers to the difference (that is, the gap) between the actual gross domestic product (GDP) and the GDP that would exist if the economy were at full employment (this is also known as the “potential GDP”).

First established by influential economist John Maynard Keynes, the macroeconomic concept of the inflationary gap is applied in order to assess and quantify the pressure of inflation. During the course of the business cycle, it arises when the economy is in the process of expanding. Specifically, they appear when the output of an economy that could potentially be created at full employment (that is, the full-employment real GDP) is less than the equilibrium level of that economy.

What Does an Inflationary Gap Mean?

In practice, an inflationary gap happens when demand for goods and services is greater than production as a result of situations like high employment, high government expenditure, and high levels of trade activity. Then, the real GDP ends up higher than the potential GDP—there is an inflationary gap. It’s called an inflationary gap because the higher real GDP leads to higher levels of consumption throughout the economy, increasing prices over time.

To describe this process more specifically: consumers experience higher levels of demand for goods and services because there are more funds available throughout the economy. Meanwhile, supply has not caught up with this higher demand, as production levels do not usually increase as quickly as consumer demand does. As a result, prices increase in order to return the market to equilibrium.

The graph below is a visual representation of an inflationary gap. In this image, the vertical axis shows aggregate expenditure, while the horizontal axis shows national income or aggregate output.

Furthermore, in the above graph, Y1 is the national income level at full employment. C + I + G + X – M is equal to the aggregate demand curve marked AD. This crosses the 45 degree line at point A, which means that an equilibrium income is at Y1.

The price will not rise, because aggregate demand and supply are equal. And then if the AD1 curve moves up to AD2, the equilibrium output does not increase–output can’t increase past the full employment level.

Governments have an array of contractionary fiscal policies at their disposal that they can put into practice to help minimize inflationary gaps. The most significant of such policies include the following:

These and other such fiscal policies work to bring the economy back to a state of equilibrium. They do so by influencing demand for goods and reducing the amount of money at consumers’ disposal.