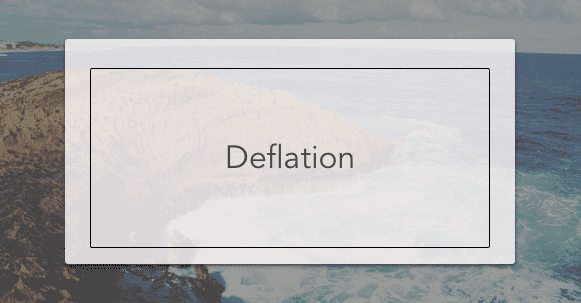 Deflation is defined as the decrease in the average price level of goods and services. It means a general decrease in consumer prices and assets, but the increase in the value of money. If the inflation rate is negative, i.e., below 0%, then the economy is experiencing deflation.

Deflation usually occurs during a deep recession, when there is a sustained fall in demand and economic output. Deflation is measured by a decrease in the Consumer Price Index.

Disinflation is when the price levels are rising but at a slower rate, i.e. inflation rate of 8% vs 5%.

One of the main causes of deflation is a fall in money supply but more specifically, a decline in the circulation of money would lead to less money going around.

After a credit bubble like the one experienced in the United States in 2008, has led to people seeking to pay off debts. This led to a decline in the circulation of money.

When people are forced to spend more on taxes, they spend less on everything else, which leads to a decline in the circulation of money. This is especially true when a government is using the taxes for debt service. Tax money used to repay government debt will not be recirculated.

In the diagram above, we can see a decrease or shift to the left in the Aggregate Demand (AD), which decreases prices from P1 to P2 and output from Y1 to Y2. A decrease in Aggregate Demand can occur because of a financial crisis or a trade partner’s fall in import consumption. This results in a new equilibrium at a lower price level P2 and real GDP of Y2.

Customers might delay purchases expecting the price of the good to decrease further, this leads to a decrease in Aggregate Demand and a lower price level.

Firms are forced to lower price levels to win customers, thus cutting down on costs. They often fire workers and decrease wages.

Indebted firms and customers are reluctant to invest and consume more because the value of their debt will increase, since their money is worth more as deflation increases.

Example of Deflation in the United States

The fourth was between 1930–33 when the rate of deflation was approximately 10 percent/year, part of the United States’ slide into the Great Depression, where banks failed and unemployment peaked at 25%.

The deflation of the Great Depression partly occurred because there was an enormous contraction of credit (money). This contraction led to bankruptcies, thus creating an environment where cash was in frantic demand. When the Federal Reserve was supposed to accommodate that demand, it instead contracted the money supply by 30% to enforce its new real bills doctrine, so banks toppled one-by-one. This is because they were unable to meet the sudden demand for cash. From the standpoint of the Fisher equation (see above), there was a concomitant drop both in money supply (credit) and the velocity of money which was so profound that price deflation took hold despite the increases in money supply spurred by the Federal Reserve.

1. Difficult to Deal With

Deflation is a difficult problem to deal with, and most notably Japan has suffered decades of deflation, leading to a cycle of decreasing prices and decreasing aggregate demand, hence GDP.

Convincing people that inflation will increase and combine that with reasonable expansionary monetary and fiscal policies that they expect to be successful can help counter deflation. The credibility of the solution has a large impact on future expectations and the success of the policy.

A successful expansionary monetary or fiscal policy would increase aggregate demand, thus countering deflation. For example, by lowering interest rates and quantitative easing (to increase government spending). The government, through banks, could offer cheaper loans for businesses and households. Another policy could be to implement higher taxes on savings to encourage consumption.