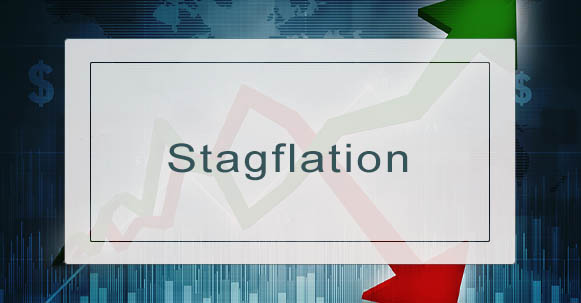 Stagflation is an unusual economic situation in which high inflation (leading to increasing prices) coincides with increasing unemployment rates and decreasing levels of output/stagnation of economic growth. That’s why it’s called “stagflation”: it’s a clear combination of inflation and economic stagnation. Economic stagnation is defined as an extended span of minimal or nonexistent economic growth (generally, that means under 2 or 3 percent growth annually).

The reason stagflation is often described as “unnatural” is that, in most cases, weak economies do not see high rates of inflation. That’s because, in your average market economy, inflation is actually inhibited by low levels of economic growth: the resultant low consumer demand prevents increases in the price of goods and services. Stagflation is commonly triggered by sharp increases in commodity prices.

Stagflation has a number of potential causes, including:

The Phillips Curve and Stagflation

Keynesian economics produced the Phillips Curve, a macroeconomic theory positing a trade-off between inflation and unemployment. With the Great Depression looming large in recent history, economists in the 20th century feared deflation while believing that inflation-lowering policies made life harder for unemployed people. They believed, too, that policies created to mitigate unemployment would produce higher inflation. But the stagflation of the mid-twentieth century complicated things by showing that this rule wasn’t true across the board. (And more broadly, it demonstrated how economics-in-practice can contradict and undermine even dominant economic theories.)

The History of Stagflation

After the mid-twentieth century, and particularly during the 1960s and 1970s, stagflation gained wider recognition as a serious problem. The term “stagflation” itself was coined by U.K. politician Iain Macleod in the 1960s, during a speech in the House of Commons. He was describing the United Kingdom’s “stagnation situation,” in which there was a combination of stagnation and inflation.

Later on, at the time of the oil crisis, the price of oil increased threefold in the 1970s and stagflation resulted. The U.S. experienced a recession, with five quarters in which GDP growth was negative. In 1973, the rate of inflation doubled; by 1975, the rate of unemployment reached 9 percent.

As described in the previous section, stagflation moves the Phillips Curve further to the right on the graph. This stagflation-induced shift as it manifested in the case of the United States economy in the 1970s. With higher inflation as well as higher rates of unemployment, the trade-off had worsened.

Meanwhile, in the United Kingdom during 1974, there was a 25 percent increase in inflation along with not only minimal but negative GDP growth. This situation was produced by the tail end of the Barber Boom (itself created by the 1972 budget of Conservative politician Anthony Barber) as well as the increase in oil prices, as was the case in the United States.

There were major changes in inflation and GDP growth in the UK from the mid-20th century, shortly after World War 2, until 2009 (be sure to note the drastic spike in inflation rates in 1974):

During this time, the overriding economic theories of the era (which were popular in academia as well as in the policy world) struggled to account for the causes of stagflation. In fact, these prominent economic theories had incorrectly set up stagflation as an impossibility. (Most notably, this includes the Phillips Curve, discussed in more detail below.)

In the 1970s, the strong presence of stagflation also led Yale economist Arthur Okun to develop the Misery index. This was a straightforward metric that functioned to quantify the misery average people felt in response to stagflation. The Misery index itself is quite simple: it is the sum of the inflation rate and unemployment rate. (In more recent years, the Misery index has now incorporated other numerical indicators, including the lending rates of banks.)

Since the economic chaos that peaked in the 1970s, inflation has been a normal situation, even at times when economic growth has been minimal or negative. And in the last half-century, all US recessions have involved steadily increasing consumer price levels.

Although not as serious as that of the 1970s, some stagflation also took place during the 2008 Great Recession, when oil prices increased. The Fed used expansive monetary policies in response to this economic downturn.

How to Address Stagflation

There are a number of possible responses that can be used to effectively mitigate stagflation. None are absolutely foolproof, nor are they typically simple to implement. They are useful, however, so we will describe them here:

Based on economic history (much of which we’ve described so far), we know that high oil prices contribute significantly to stagflation. Thus, it stands to reason that minimizing an economy’s dependence on oil can help lower the risk of stagflation. Such an energy transition also has the additional, much-needed benefit making the economy and society as a whole more sustainable.

Supply-side policies can increase productivity in order to facilitate higher levels of growth, while the risk of high inflation remains low.

A central bank (such as the Federal Reserve) or other such Institution can raise interest rates to lower levels of inflation. They can also lower interest rates to contribute to greater economic growth. This approach has limited in that monetary policy is unable to address a simultaneous recession and inflationary issues.

The Risk of Future Stagflation

2011 saw the public afraid of the possibility of a new, economically disastrous period of stagflation. This fear arose in response to the Fed’s expansionary monetary policy, which had been used as a strategy to respond to the 2008 financial crisis.

Likewise, Congressional approval of an expansionary fiscal policy included high deficit spending and a major economic stimulus package. Combined with economic growth of just 1 to 2 percent, this situation raised fears of stagflation, which could occur if the economy continued to stagnate as inflation persisted.

Notably, though, the government strategy of increasing global liquidity functioned to inhibit deflation, which is, in fact, a much more serious risk to the health of the economy than high levels of inflation. The Fed was watchful that inflation did not exceed the core inflation rate target of 2 percent. Had inflation exceeded that target, they would have responded by instituting a monetary policy that was constrictive rather than expansionary.

Here is the good news: although stagflation was an undoubtedly significant economic problem in the 1970s, the context that produced it most likely will not arise again. There are three major reasons why stagflation is likely to remain a thing of the past: