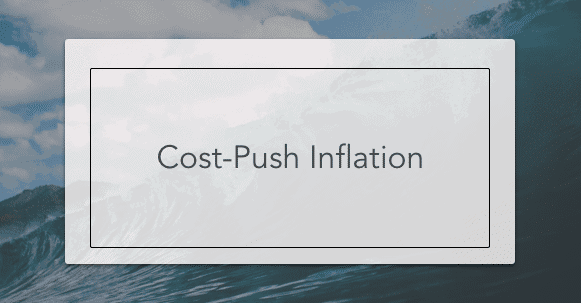 The wage-price spiral suggests that rising wages increase disposable income, thus raising the demand for goods and causing prices to rise. Rising prices cause demand for higher wages, which leads to higher production costs and further upward pressure on prices.

In the early 1970s, the Organization of Petroleum Exporting Counties (OPEC) took steps to decrease global oil supply in order to boost price levels. This resulted in a supply shock and an increase in general prices since oil is an important component of most production processes. Since there was no increase in demand, this rise in inflation can be attributed to Cost-Push Inflation.

In the above diagram, we see a shift or decrease in the Aggregate Supply curve from AS1 to AS2, resulting in a lower Real GDP and higher prices (from P1 to P2).

A supply shock is when there is a big increase in the prices of critical commodities like oil. This results in higher transport costs and all firms would see a rise in costs.

Wages form a large percentage of costs for firms. Strong labor unions can influence inflation as they push for higher wages, which will lead to an increase in costs of production for the firm and hence higher-priced goods.

A devaluation of the currency would result in higher prices of imported goods.

An increase in indirect taxation. Higher VAT and Excise duties will increase the prices of goods.

However, successful Supply side policies will increase or shift Aggregate Supply to the right. For the short term, central banks would use contractionary monetary policies that would reduce Aggregate Demand. The result of this policy would be high unemployment and a fall in output or GDP.

In the diagram above, Aggregate Supply has shifted to AS2 because of a supply shock, prices have increased from P1 P2 and GDP has fallen from Y1 to Y2. With a contractionary monetary policy, Aggregate Demand shifts from AD to AD*, the new equilibrium price is P1, and output Y*. This output (Y*) is lower than the initial output and Y2, but it’s at a lower price level. There will be a lot of pain regarding unemployment and lower economic growth in the short run for the economy.